Jeonju is an ancient royal Korean city and the birth town of Sara Dansie Jones – a community leader in Salt Lake City, Utah. Brought to the US at 3 years old, she had a tattoo on her forearm of a cross and four dots. While succeeding at everything she did, Sara still felt strongly about her Korean roots. Even though her US parents had her tattoo surgically removed, on a whim Sara redrew it on her arm, took a photo, and posted it on a Korean website where adoptees can search for their birth families. Within three days, a Korean man reached out saying that his close friend had the same tattoo. Just by chance, Sara had found her birth family!

A few months later with her husband Matt and two boys, they flew to Jeonju and reconnected with two brothers, an aunt, and an uncle where she learned that her late father – destitute and abandoned by his wife – dropped off his three children at an orphanage with the intent to soon collect them. To keep them connected, he tattooed all of them with the cross and four dots. Learning about her history and reconnecting with her birth family, Sara secured her deep roots and connection to Jeonju, Korea.

In honor of Sara and Korean adoptees like her, Curious Table serves you a Jeonju-style Royal Bibimbap with characteristic rice and a variety of “na-mul” vegetable sides. It is a classic dish that represents the depth of our roots, and the strength of our bonds even when time and space might force distance between those we love.

Curiously and courageously, pile the beef, egg & na-mul on top of the seasoned rice. Add the spicy bibimbap sauce to taste and enjoy.

For more instructions, watch this amazing video from our inspiration and guest chef Sara. 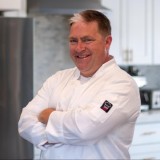